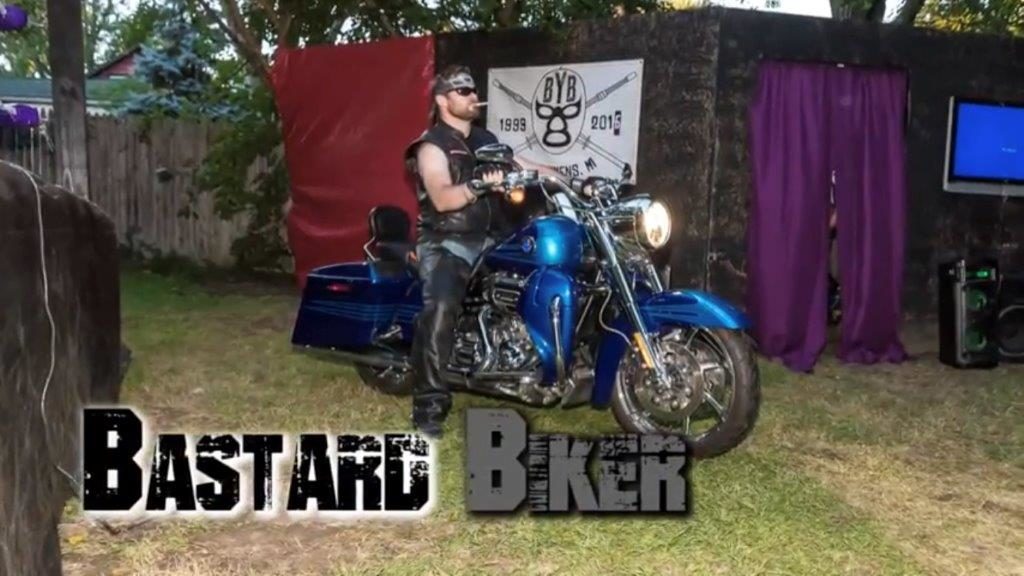 Biker made history in 2016 when he participated in the first ever documented BYB tag-team wrestling match against Ameriken & Elliott Quinn. He also became the first BYB wrestler to be pinned by a girl, but rumor has it he was paid $400 bucks to do the job. When he’s not wrestling in the ring or battling in the courtroom, Biker roams the streets on his motorcycle, eager for the next challenge. Whether it’s opening a can of beer or opening a can of whoop ass, the Biker stays ready. 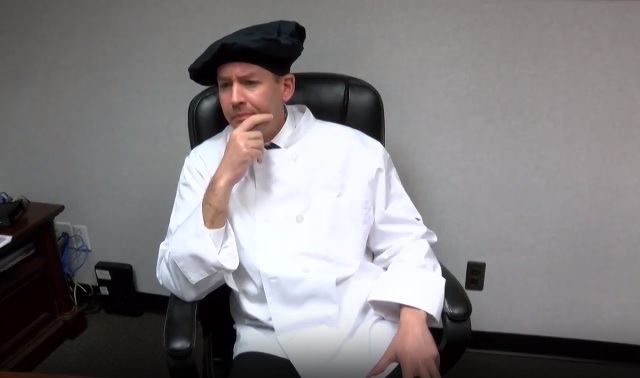 Chef is a master of the mischievous. With a record of 0-4 and 11 total disqualifications, he’s the most sadistic backyard wrestler to never step foot in a BYB ring. When not battling in the squared circle, he can be found leading criminal masterminds, cooking at Bob Evans, or mentoring the world’s top heel wrestlers. With a focus on sharpening his knife as well as his physical abilities, Chef always strikes first, strikes fast, and strikes effectively. 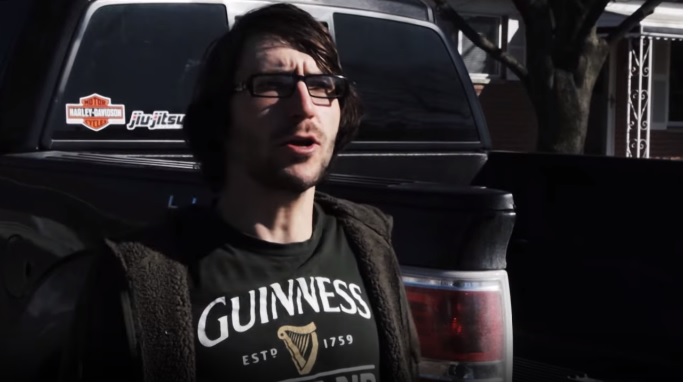 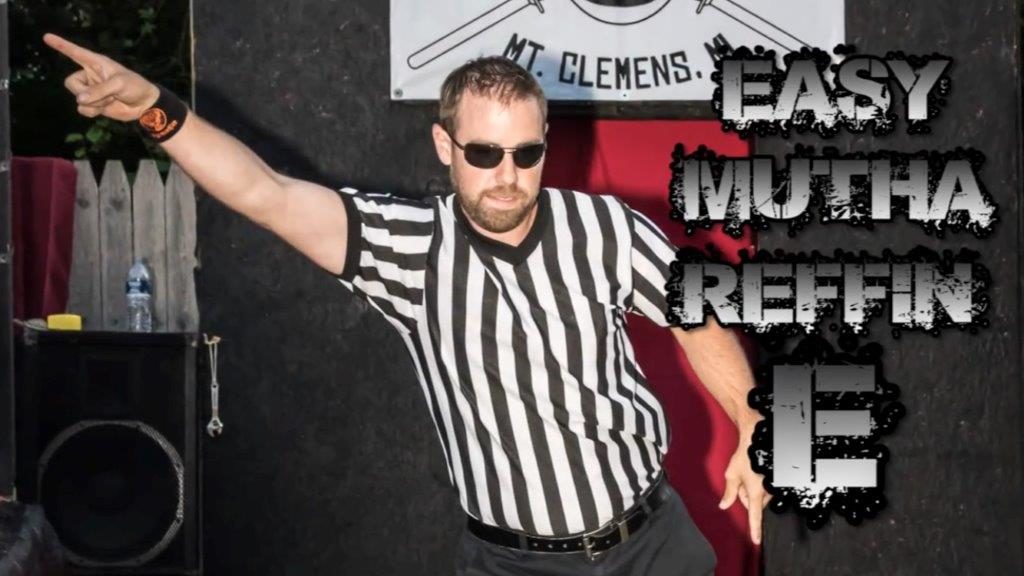 Eazy E made his refereeing debut in 2014 when he called Wes Daddy vs The Filthy Frenchman. In doing so, he became the first referee to have not just one, but two entrance songs in the same event. When he’s not studying perfect referee technique, he can mostly be found fishing, drinking beer, listening to country music, playing video games, or watching TV. With his unique style and take charge attitude, E will go down as one of the most prolific referees in BYB history. Eat your heart out Earl Hebner.

Elliott Quinn is fun for the whole family. Full of smiles, charm, and crowd-pleasing personality, Quinn made double history when she debuted in BYB’s first ever mixed gender tag-team in 2016. Along with hubby Ameriken, the duet defeated the Bastard Biker and Lance Wheeler. When this feisty mom isn’t changing diapers at home or closing deals in the office, she’s dealing out punishment in the wrestling ring. Cunning, versatile, and deceivingly lethal, Eliott Quinn knows exactly what she wants and is always up to the task.

How can you be expected to follow the rules when you don’t even speak English? The Filthy Frenchman made his backyard wrestling debut in 2014. Although France fell on that day, he redeemed himself with consecutive victories in 2015 and 2016 over Ameriken & Wes Daddy, disrespectively. The masked vigilante is not afraid to utilize the filthiest of tactics in order to best his opponent, whether it be in wrestling or in real life. With his devastating bulldog and gigantic loaf of French bread, Filthy is one of BYB’s most notable villains. When you need some dirty deeds done dirt cheap, The Frenchman is your man. 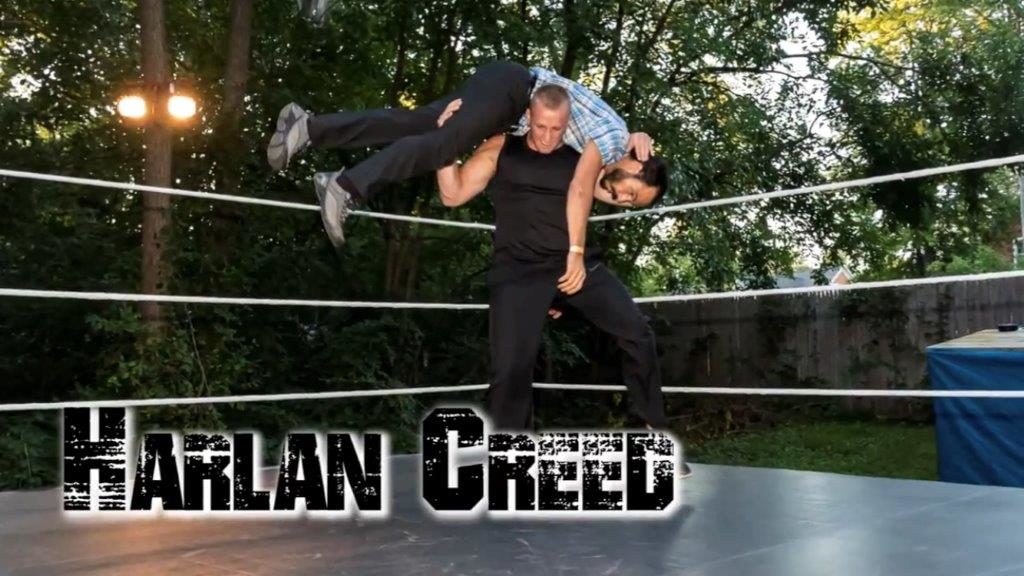 Harlan Creed is into lifting heavy things and putting them down hard…namely other backyard wrestlers. He burst onto the BYB scene in 2014, scoring back-to-back victories over Tommy Nitro. His style is so vicious that he delivered an F5 to his own manager and legitimately shattered his leg in the process. With his silent, ruthless aggression, Creed is BYB’s most formidable big man. Devastating and powerful, he remains undefeated as a wrestler. When he’s not breaking bones in the ring, Creed can be found crushing weights at the gym, making gains, and ingesting endless amounts of protein. There is no opponent, or dietary restriction, that can come between Creed and his progress. 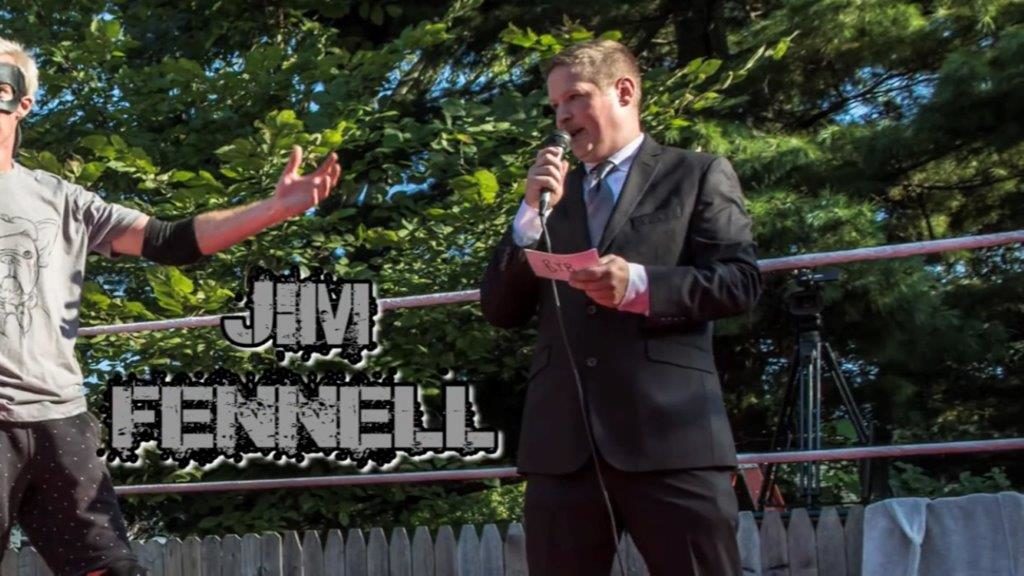 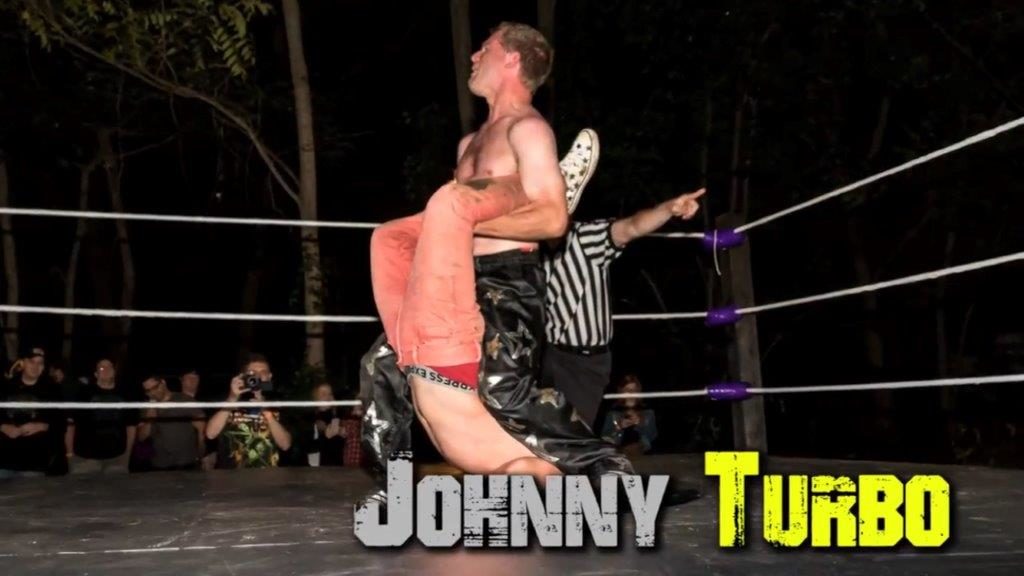 He puts the turbo in turbo crust. He puts the WIN in winning. He’s Johnny Turbo, BYB’s most notorious baby face. With a victory over Richard Boykin in his 2006 debut, Turbo hasn’t looked back since, rattling off win after win after win. His undefeated streak is that of legend. Many have attempted to conquer it but all have fallen. It has been said that Johnny Turbo can kill two stones with one bird.  When Turbo reads self-help books, the books get better. He once defeated Lord Deezus, Justin Charge, Tomas Rodriguez, Harlan Creed, and The Filthy Frenchman all in one night. A little motivation and a large Jet’s pizza is all Turbo needs to get the job done. Whether in life or in the wrestling ring, he’s always going over. 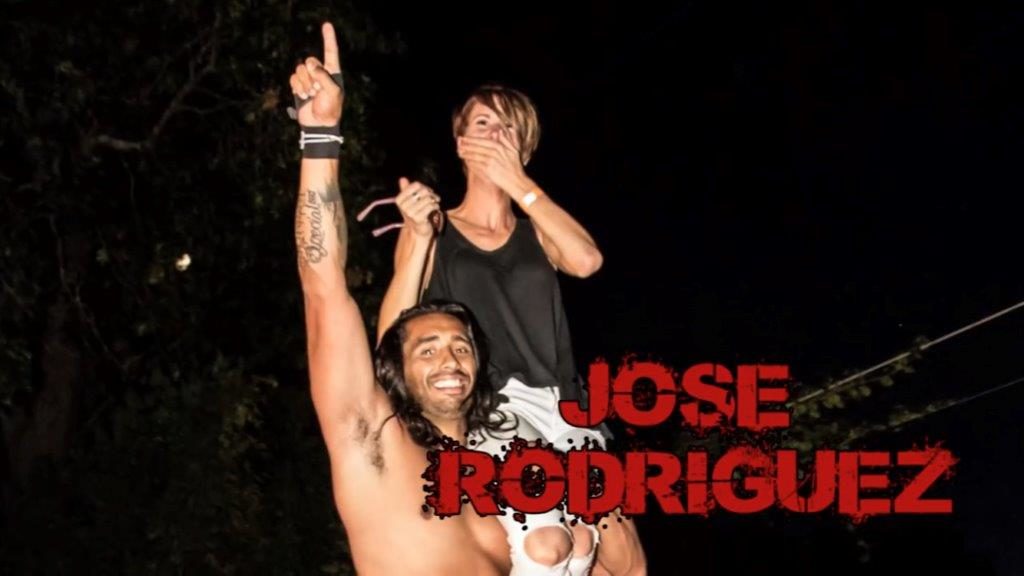 Nobody embodies the heart and spirit of backyard wrestling quite like Jose “Paco” Rodriguez. After creating BYB in 1999, Jose gave everything he had to the organization, putting on countless shows and fulfilling multiple roles in the process: promoter, main eventer, referee, talent coordinator, masked jobber, technician, construction worker, stuntman, and production worker; basically whatever it took to keep the show running. After 16 years of BYB, Jose declared 2014 his farewell event, and literally rode off into the sunset on his motorcycle, but surprisingly returned in ’15 and ’16 to wrestle back-to-back matches against his own brother Tomas. Whether promoter or wrestler, Jose IS the Back Yard Brawl, and without him, it never would’ve been a thing. 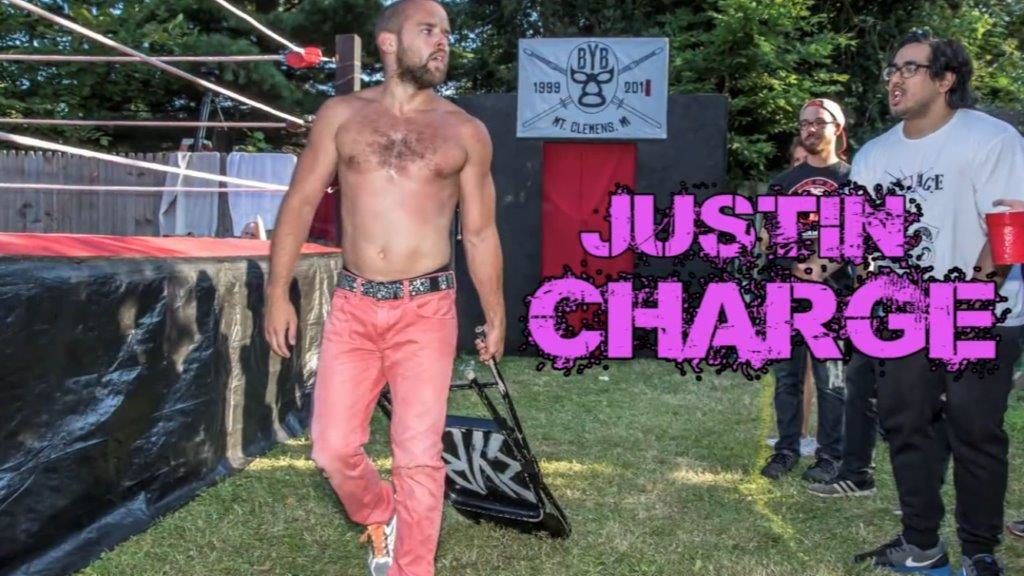 Co-creator and co-star of The Following Announcement, Justin Charge got his start with BYB in 2013 as an animated spectator, where he cheered his brother Johnny Turbo on toward victory. That admiration would turn to jealousy when Charge turned on his brother by cornering Lord Deezus vs Turbo at BYB 2014. Since then, the rivalry between Charge and Turbo has only intensified, as the brothers wrestled one another in back to back BYB events, with Turbo coming out victorious both times. When he’s not trying to end his brother’s undefeated winning streak, Justin Charge is teaching yoga, traveling the world, styling, profiling, and letting the world know how he feels about everything in his Fully Charged segment. 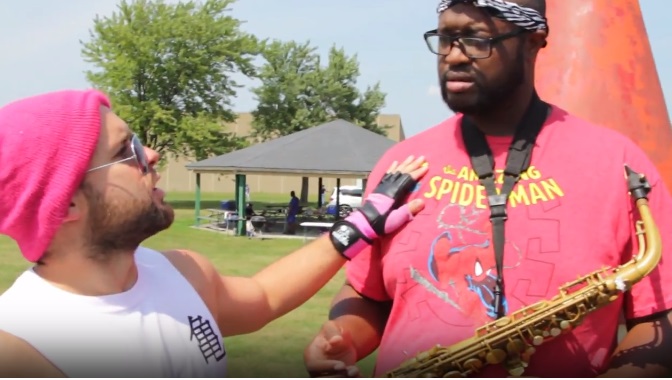 Although all of the late 90’s/early 00’s footage of the Back Yard Brawl has been lost, the legend of the early days lives on through OG’s like Kenny Keista. Kenny wrestled in the early days of BYB until it went on hiatus for five years, but never returned to action when the show started back up in 2013. He now works in finance, teaches music, and guest stars on The Following Announcement. 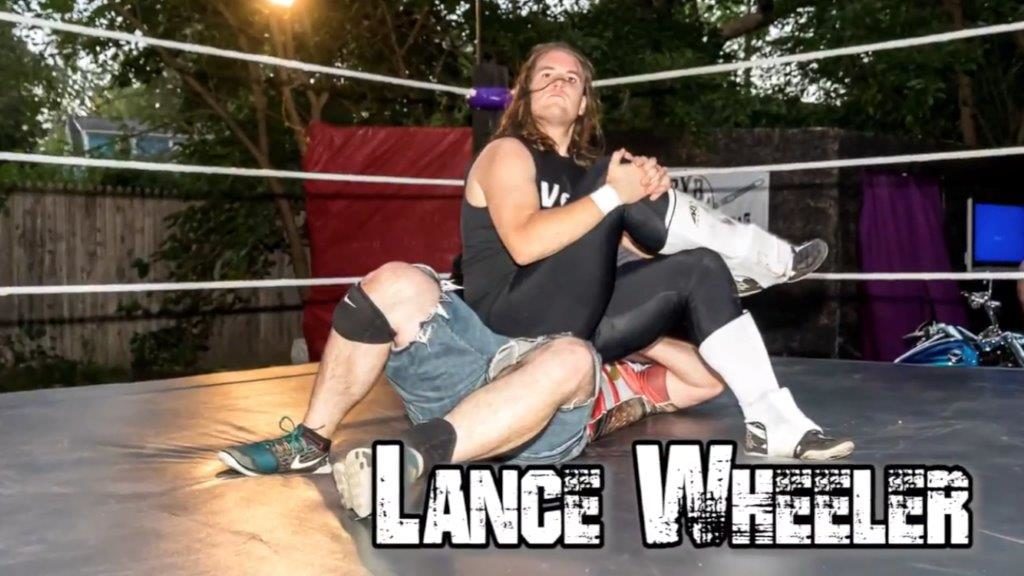 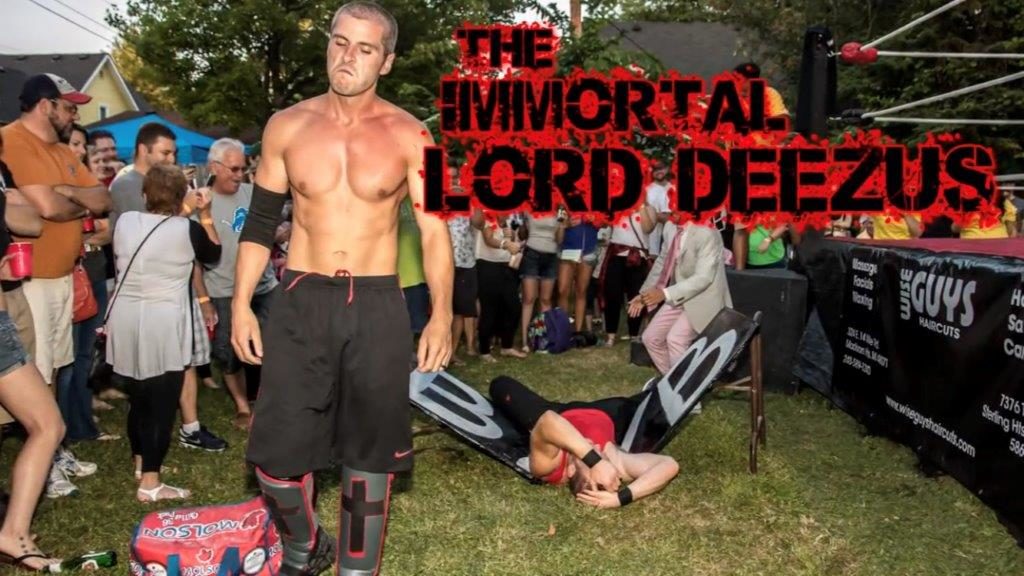 Following a backyard wrestling career which spanned 10 years, Lord Deezus found his true calling when he became our Lord and savior. When BYB was declared dead in 2014, Deezus helped keep the show going for another two years, then turned the franchise into a hit YouTube show called the Following Announcement (don’t forget to like and subscribe). A legend in his own mind, Deezus can be found lighting up social media on a daily basis as he flaunts his other worldly good looks, impressive physique, and superior intellect (@Deezus999 sub for sub). When he’s not living the gimmick, Deezus can be found dominating pool halls, watching horror movies, or taking in a good night of MMA fights. Whether in the wrestling ring or the editing studio, Lord Deezus is always a thing. 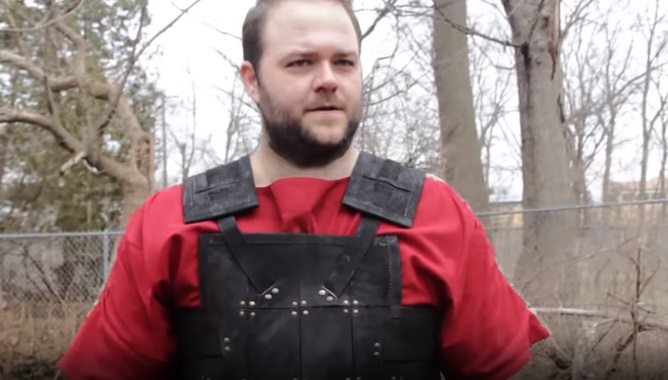 While he never officially competed in the Back Yard Brawl, Maximus Decimus Meridius made his presence known when he debuted in season 1 of the Following Announcement. Recruited by Deezus and Charge to add some muscle to their alliance, Maximus has become a staple character on the show. In season 5, he was involved in an epic clash with Johnny Turbo during the impromptu “BYB’17” event. When he’s not commanding the armies of the North or searching for the man who murdered his family, Maximus stays ready for battle. In this life or the next, he will have his vengeance.

He’s money on the mike…he’s Money Mike. One and done as BYB announcer, Mike was the MC at the Back Yard Brawl’s final show 2016. His current whereabouts are unknown.

When you’re in desperate need of a quick 1-2-3 count, rely on Martin. Impartial and reliable, he always calls it right down the middle. As one of BYB’s most prominent referees, Martin also became a staple character on The Following Announcement, assisting Deezus and Charge in their pursuit of ending Turbo’s winning streak. When he’s not refereeing or performing in hit YouTube shows, Martin is studying to become a medical doctor. If his bedside manner is anything like his ringside manner, he’s the doctor you wanna call. 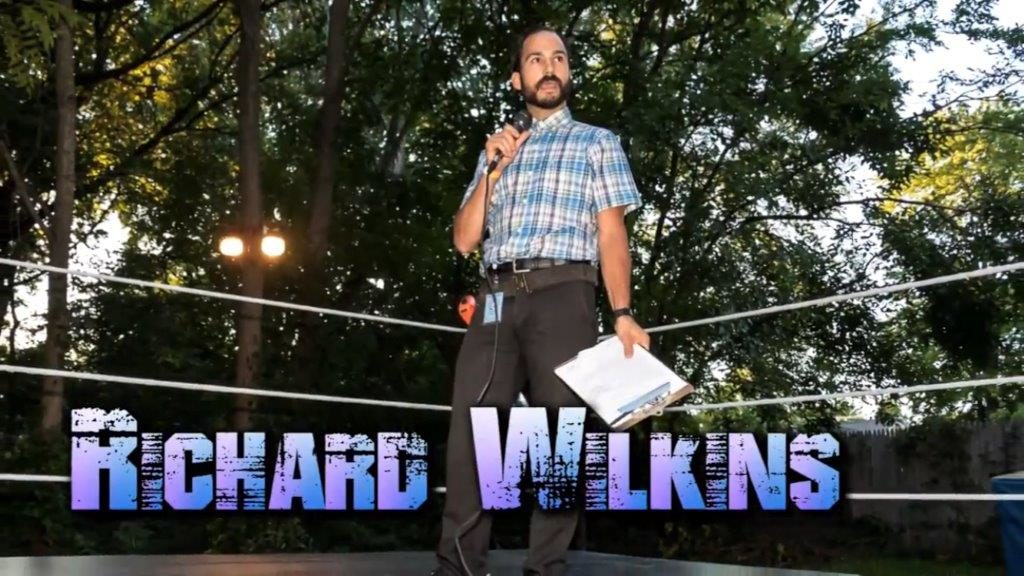 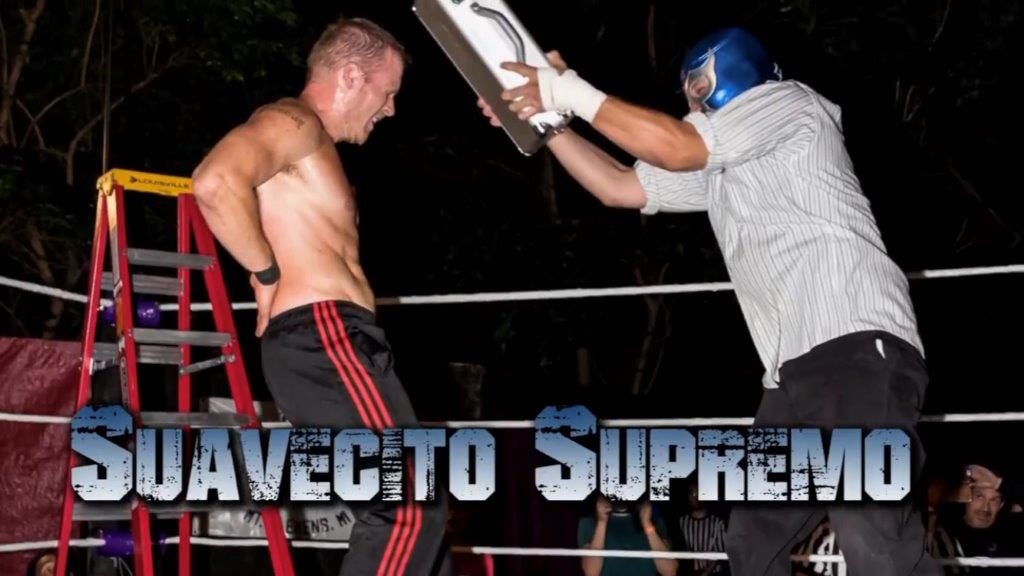 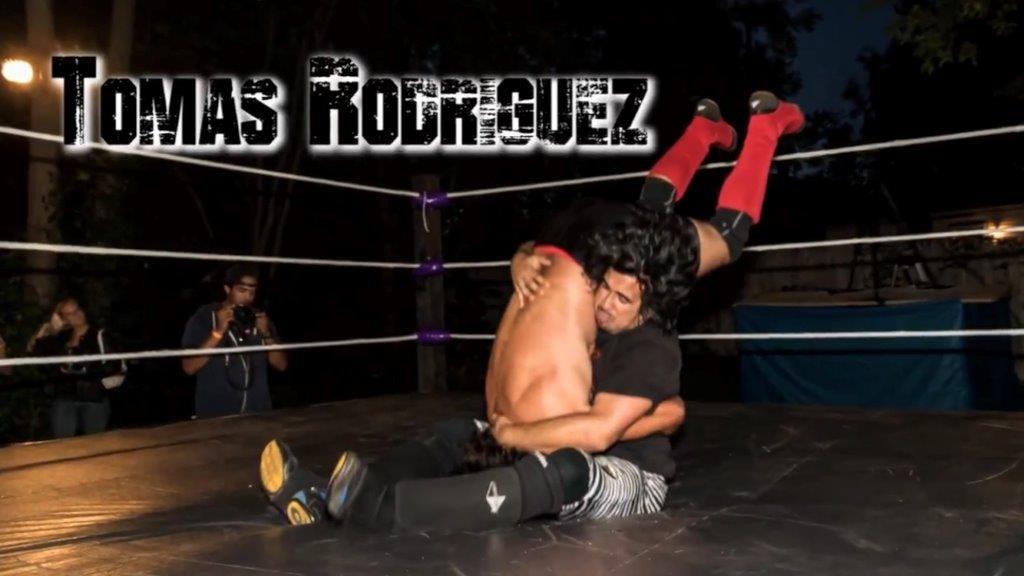 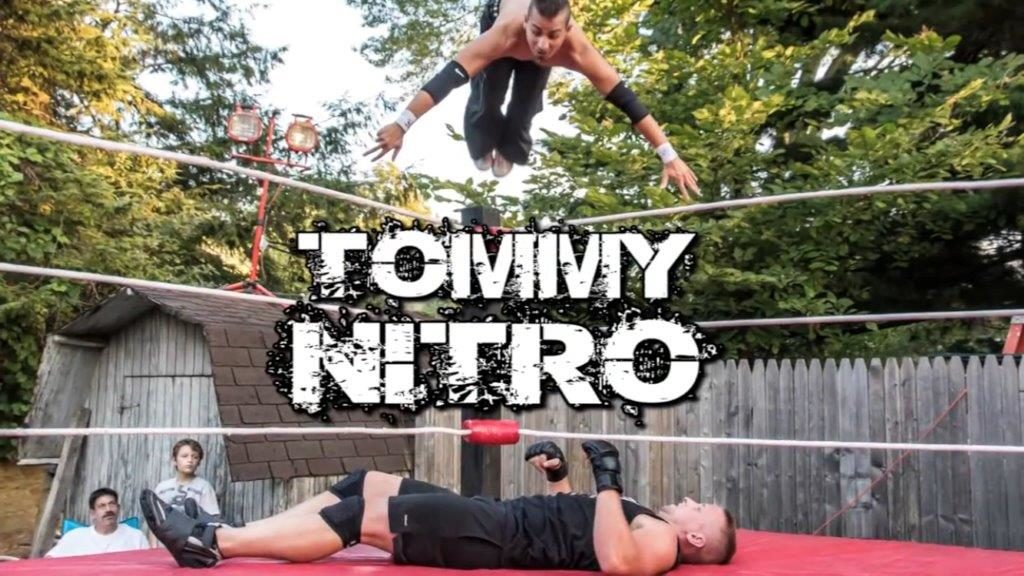 Tommy Nitro made his backyard brawl debut in 2014, but suffered back-to-back losses to Harlan Creed. Luckily for him, losing never gets in the way of having a good time. Full throttle both in and out of the ring, Nitro lives his life one adventure after the next. He can also be credited for helping to keep BYB alive in 2015-2016, after many thought it was finally done for good. The ultimate babyface, Nitro pours his blood, sweat, and tears into everything he does, earning the respect of his fans, as well as his adversaries. Win or lose, you’re gonna want to have a beer with him after it’s over. 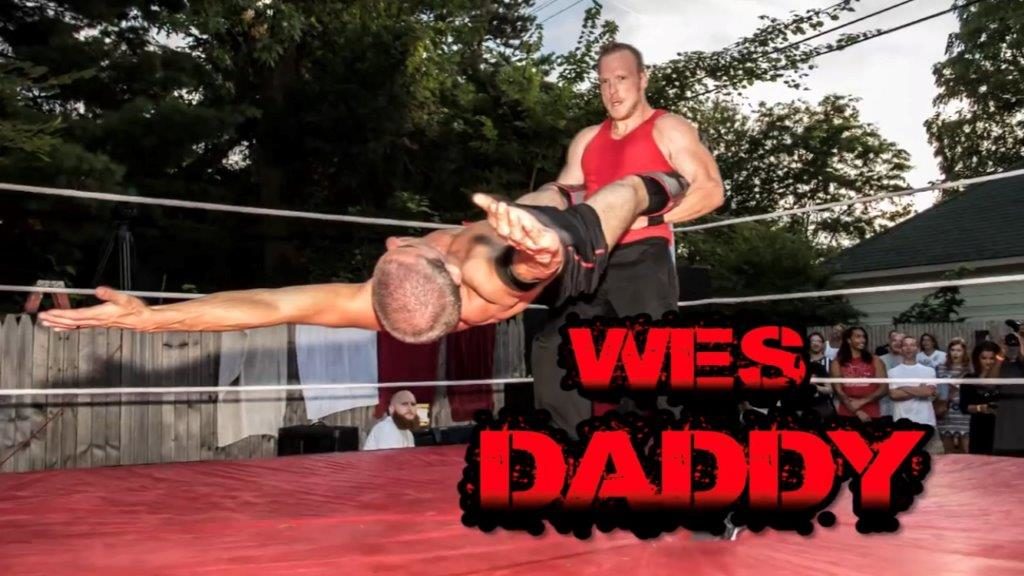 Wes Daddy got his start in BYB as a passionate spectator then as a referee in the early-2000’s. In 2006, he finally debuted as an in-ring performer. 90lbs and 56 choke slams later, he is the daddiest daddy BYB has ever seen, dedicating 10 years of hard work, clean eating, abs, and buckets of sweat. In 2016, Wes officially announced his retirement from back yard wrestling then started his own website and YouTube cooking show called Wise Eats. From breaking necks in the wrestling ring to transforming lives on the internet, all Wes Daddy wants to know is, “are you ready to make a wise choice?” 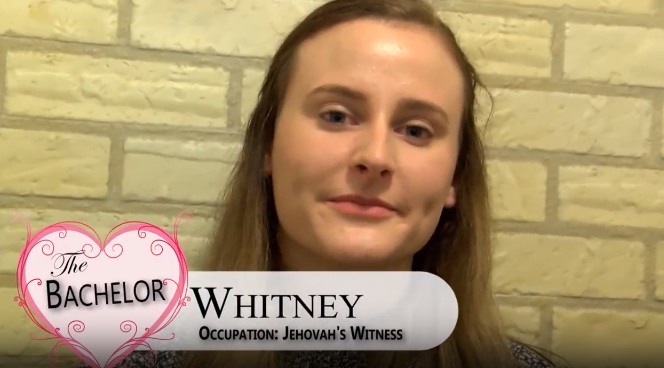 Whitney fought for Justin Charge’s heart on Season 2, Episode 6 of The Following Announcement. She also inspired the Wise Eats “Stone Cold” Cashew Milk recipe. Check out her website at whitneyreddy.com.

See all of the Back Yard Brawl action HERE! 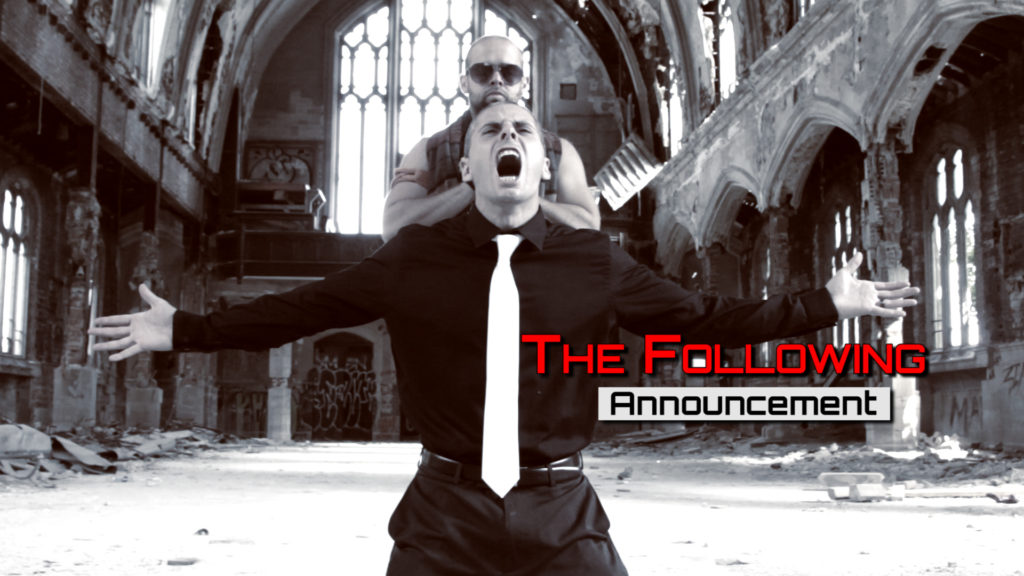 See all of The Following Announcement episodes HERE!

Drink Your Way to Better Health with the Always Workin’ Water

Hydration is one of the most important elements of overall health and fitness. Every day when I wake up, drinking high quality water is my first priority of the day. It fires up your metabolism, flushes out toxins, fuels your brain, and reduces appetite. Only after I fully hydrate will I start to work, check my phone, e-mail, text, etc. Take your hydration to the next level with Wise Eats “Always Workin’” Water. Your drinking water will never be the same again!

I used to drink at least full liter of pop per day. If I can drop the pop and start making wise choices, you can too!

Make hydration part of your daily routine, and you will be amazed at the results. Next time you’re in the kitchen, make a wise decision.